Other than players still playing, still eligible for eventual BBWAA voting into the Hall, or banned from the game, Lou Whitaker has the highest WAR total of any player not yet in the Hall of Fame. By either calculation of WAR, Whitaker ranks in the Top-100 of all players (both position and pitchers) since the beginning of the game, so it’s mind-boggling that not only is he not in the Hall of Fame, he didn’t even receive 5% of the vote in his first year – dropping him off the ballot entirely. How was/is such a productive player so underrated? Well, there are several reasons, some better than others. 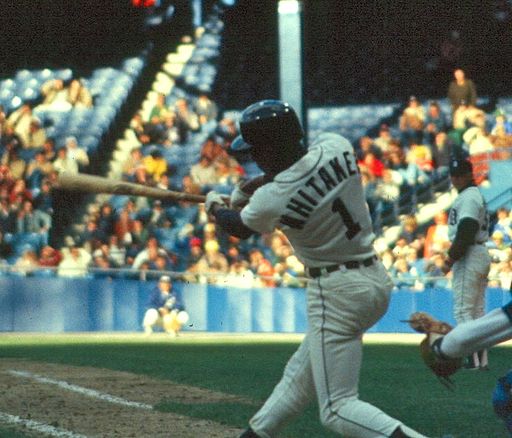 One major reason is that, like his double play partner Alan Trammell, Lou Whitaker played outside a major media market. And Whitaker, even more than Trammell, was a quiet star – someone who was never the face of his franchise. Even growing up in Detroit (this is where we happily admit to being a massive Tigers homer), Trammell and Jack Morris were probably the most prominent names during the 80s, and Cecil Fielder definitely loomed largest (in many respects) as Whitaker’s career came to an end in the 90s.

Another reason is that one of Whitaker’s best offensive skills – a high walk rate – was severely undervalued in the era in which he played. Whitaker’s career walk rate was 12% – that would have been good for 18th in MLB in 2016 and his career .363 OBP would be top-50 over the past 10 years (of players with 2500+ PA).

Whitaker’s skill set would have been valued much more accurately in the Post-Moneyball MLB.

Even without that reassessment, Whitaker’s stats are on par or better than his contemporaries who have made it into the Hall. If we do a Who’s Who Test on Whitaker and three second basemen from the 80s and 90s who’ve made it into the hall, it’s definitely a tough one:

One of those players made it in on his second ballot. Two of those players made it on their third ballot. One of them didn’t even get 5% in his first year. The BBWAA voters were sure three of those men were easily Hall-of-famers and the fourth wasn’t even worth a second thought (or at least a second vote). If you say that’s not crazy, then we’re comfortable saying that you are.

On that table, Player A is Roberto Alomar, Player B is Lou Whitaker, Player C is Ryne Sandberg, and Player D is Craig Biggio. While each has his own strengths and weaknesses, they’re all rather similar players, so the disparity in Hall of Fame votes is pretty remarkable.

If we start from the idea that all three belong in the Hall (and we’d say they do), comparing each to Whitaker should be helpful in seeing whether he belongs or not. First up, the most recent inductee: Craig Biggio. 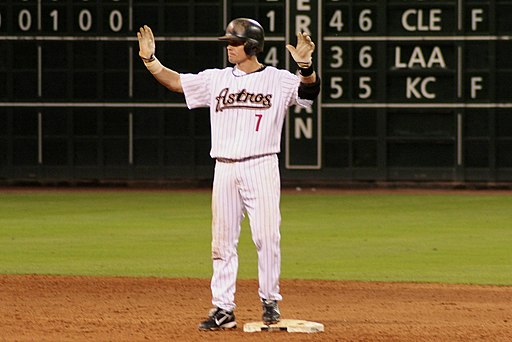 In one obvious aspect, Biggio’s case v. Whitaker’s is clear: Biggio has 3060 career hits. Longevity absolutely matters when considering a player’s place in the history of the game. However, like many players who just barely hit their big milestone numbers, Biggio got there by hanging on long after he became unproductive.

In his final two seasons, Biggio posted a .249/.296/.402 line, averaging 15.5 HR and 66 RBI per season – good for a wRC+Weighted Runs Created Plus: A comprehensive measure of offensive production relative to the league. 100 is average and each point above or below is a percentage better or worse than the average player. of 78 and 0.1 fWARWins Above Replacement as calculated by FanGraphs. A stat that attempts to measure a player’s contributions in all facets of the game and quantify how many more wins that player contributed than a “replacement level” player would have (a replacement level player being a hypothetical “AAAA player” every team has in its farm system.. In 2006, the Houston Astros finished 1.5 games out of first in the NL West, the only reason a player producing like Biggio was still in a contender’s lineup was club loyalty to their longtime star.

There have been some to charge Biggio with being primarily a “compiler” as a player, and while that’s not as true as it might seem, it’s also not false either. Biggio was clearly pressing for that 3,000th hit, posting a 16.9% strikeout rate in his final two years (2.9% above career average) and walking only 5.4% of the time (almost 4% below his career average).

Beyond the counting stats and Biggio’s skills as a baserunner, Whitaker was Biggio’s equal or better in most every respect. Whitaker walked more and struck out less (a 5.7% total shift in Whitaker’s favor), his wRC+ was a bit better, and he was a much better defender.

Sweet Lou was great with the glove

In fact, Whitaker’s defense might be the most underrated aspect of his play. Of all players in MLB history who played 75%+ of their games at 2B, Whitaker ranks 11th in dWARDefensive Wins Above Replacement as calculated by Baseball Reference. A stat that attempts to measure a player’s contributions in all defensive facets of the game and quantify how many more wins that player contributed than a “replacement level” player would have (a replacement level player being a hypothetical “AAAA player” every team has in its farm system.. And of the ten players ahead of him, none of them have more total WAR than he does. Compared to his three 2B contemporaries, Whitaker and Sandberg were clearly a step above the rest, including Roberto Alomar. 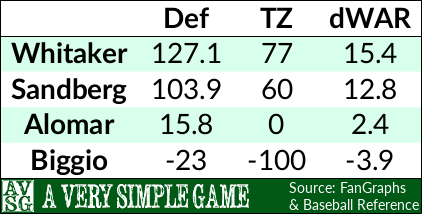 That list is certainly interesting given Alomar’s reputation for defense. And while defensive stats should be taken with a grain of salt for older players, it does make sense when looking at Alomar’s career and the dip his defensive stats took during his years in Toronto. His sure hands and balletic athleticism looked great to the eye, but his slower than average first step hurt him on the Skydome turf. With the Padres, Orioles, and Indians he had positive DEFDefensive Runs Above Average. A stat that attempts to measure a player’s defensive contributions, including a positional adjustment (i.e., a shortstop is considered more defensively valuable than a LF). Roughly 9-10 DEF is equal to one Win Above Replacement. and TZTotal Zone. A stat that attempts to measure a player’s defensive contributions relative to league average at his position. League average is zero, positive numbers are above average, negative numbers below average., with Toronto he was well into the negative.

Whitaker hit for more power, Alomar for more average and was a better baserunner. They posted identical wRC+, with more of Alomar’s numbers coming in the offensive explosion of the later 90s.

While Biggio and Alomar were both similar to Whitaker, perhaps the most similar player is also the most direct comparison in regard to eras: Ryne Sandberg. While both Biggio and Alomar hit the majors in 1988, Whitaker played from 1979-1996 and Sandberg from 1981-1997. This overlap in era and similar skill profiles makes this comparison the most telling. 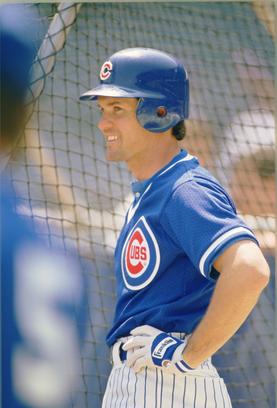 Given how well he stacks up to his contemporaries, why is it that Whitaker remains so forgotten? Well, he lacks Sandberg’s MVP and Chicago media market, he lacks Biggio’s 3,000 hits, he lacks Alomar’s multiple World Series rings and defensive reputation. All together, it combined for the travesty of falling off the all of Fame ballot after just his first year.

When the “Modern Baseball” Era Committee meets to vote next year, should Lou Whitaker be one of their first choices for entry? To answer that, we’ll leave you with one final stat. Of all players in MLB history who played 75% or more of their games at second base, here are the leaders in bWAR 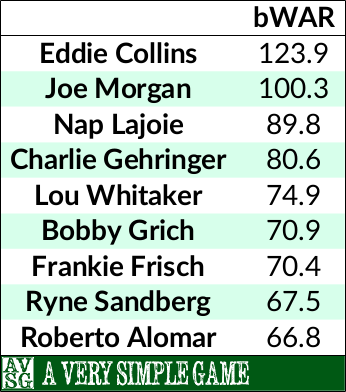 There are nine names on that list, with Whitaker fifth. Of the other eight, only one (Bobby Grich) isn’t already in the Hall of Fame. Does a player who’s top-100 all time in WAR and top-5 for his position belong in the Hall of Fame? We’d say he definitely does.

How fitting would it be for the Era Committees to correct two mistakes and send Whitaker in as part of the longest-running double play combination in MLB history? “Very” is the correct answer, it would be very fitting.

Now they just need to make it happen.