For each of the past four seasons, Mike Trout has been the best player in the American League (and likely in all of baseball), and he has only one MVP award to show for it. Baseball, a game that loves tradition like no other, will likely continue that trend this year, denying Trout yet again; this time in favor of the RedSox’ rising star, Mookie Betts (or maybe Josh Donaldson again…one or the other…like 80/20, Betts). 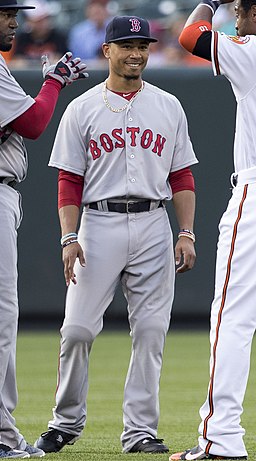 While there have been reasons for this – it was hard to vote against Miguel Cabrera’s Triple Crown in 2012, Josh Donaldson was basically Trout’s equal last season on a team that played in the ALCS – it’s still pretty remarkable that the player who, from 2012-2015 produced 54% more fWAR than the next best player in his league only won the MVP in one of four seasons.

Over the past five seasons Trout has hit more homeruns than all but four other players in the American League, driven in more runs than all but five, stolen more bases than all but four, and scored more runs than anyone. He has the 3rd highest slugging, 4th highest average, highest On-Base Percentage, wOBAWeighted On Base Percentage: A comprehensive measure of offensive production, measuring all at bat outcomes and placed on a scale roughly equal to “normal” on base percentage. .320 is average, .340 above average, .370 great, and so on., and wRC+Weighted Runs Created Plus: A comprehensive measure of offensive production relative to the league. 100 is average and each point above or below is a percentage better or worse than the average player.. And of those few people ahead of him in a category, no one name appears on every list, and only Miguel Cabrera appears on four of the five.

Mike Trout is the best all-around player in baseball and has been for each of the past five seasons. He’s one of the best all-around players in the history of the game. As August Fagerstrom noted a few days ago, only five players have ever had a 5-year stretch (at any point in their career) in which they produced more WAR than Trout has in his first five years in the league. Those players?

Take a long, slow look at those five names. That is the lofty class in which Mike Trout belongs. And again, he has (so far) only won a single MVP award for a stretch of play only exceeded by four of the best players in history. And, shockingly, there’s a chance he will be denied yet again.

Trout is once again the best player in the American League (and indeed all of baseball). However, there is again talk of awarding someone else with the title of MVP, denying Trout for the fourth year out of five. A few writers have suggested a repeat vote for the Blue Jays’ Josh Donaldson, but most writers suggesting someone other than Trout have homed in on the Red Sox’ Mookie Betts.

It is not a coincidence that both alternatives play for playoff teams – there remain many voters who still feel that an MVP need play for a winning team. We are befuddled by this to a certain degree, since it requires a definition of a player’s value based on something other than that player, regardless it’s a clearly defined and not-all-together rare position.

On the raw stats, all three players are relatively close. Particularly if we just focus on the classic “Scoreboard Trio”, Trout and Betts are nearly identical, posting lines of .315/29/100 and .318/31/113, respectively. Throw in the fact that Betts scored 122 runs to Trout’s 123, and it becomes a seemingly simple step to say “Betts and Trout are almost equal.” 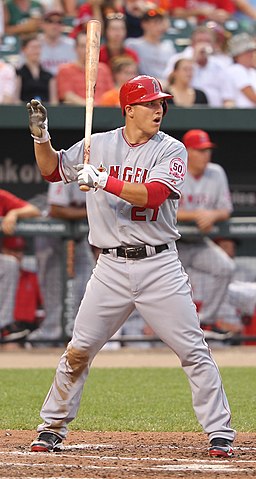 This is indeed what John Heyman says – Trout and Betts are equal except for Trout “Walking more.” Dave Cameron over at FanGraphs does a great job of breaking down why this isn’t the only difference between the two by looking at how many more outs Betts makes (each team only gets a limited number of those – using them up is meaningful) and how far he lags behind Trout in several stats.

In addition to the differences Cameron raises, Trout is also noticably ahead in other ways. First of all, those walks aren’t “just” a few walks – Trout’s OBP is almost 80 points higher than Betts. In other words, Trout got on base 21% more often than Betts. That’s a big difference.

Also, despite the similar home run totals, Trout also hit with more power, slugging 16 points higher than Betts. Combine those with the fact that Trout put up his numbers playing in pitcher-friendly Angels stadium, and his wRC+ ends up well ahead of Betts, with a major league leading 171 (Betts was 9th in the AL and 17th in MLB with 135).

Trout’s superiority to Donaldson is easier to see. While Donaldson matched Trout in power – hitting eight more home runs and slugging only a single point lower – he hit 31 points lower, and his OBP is 37 points lower. Donaldson does have a red hot postseason start in his favor – that’s a corollary to the “MVP needs to be from a playoff team” guide that some voters do consider (and which Betts doesn’t have – he went 2 for 10 as his team got swept).

Trout’s also a much better baserunner than Donaldson. When we look at each player’s SaSlgSpeed-Adjusted Slugging. A home-brew stat here at AVSG, SaSlg is slugging adjusted for stolen bases & grounding into double plays. It is used to even out the comparison between heavy power hitters (e.g., Miguel Cabrera) and guys with a good power speed balance (e.g., Andrew McCutchen or Mike Trout). Whereas slugging is total bases divided by at bats, SaSlg is (total bases + stolen bases – caught stealing*2 – double plays grounded into)/total bases., Trout separates himself further from each – .570 for Trout vs. .543 for Betts, and .530 for Donaldson. In other words, Trout hits with more power than Betts, runs better than Donaldson, and gets on base at a much higher clip than either.

Adjust those raw stats for that difference, and Trout’s no longer equal, he’s better. And more than than, he’s better in a meaningful way (at least that’s our argument).

But, despite all of that, Trout might still miss out on the AL MVP award for the fourth time in a five year stretch only equaled by Ruth, Mays, Bonds, Williams, and Hornsby. We think Trout should win, but we’ve also got a sinking feeling that our pre-season prediction is going to come true and once again Trout will be denied.

This is one prediction we’d be quite happy to get wrong.