As Ichiro nears 3000 hits in MLB and tops 4256 for his professional career, we’re reminded (by no one more than the man himself) that Pete Rose is MLB’s “Hit King.” Never forget, however, that Pete Rose (the player) only has that record because Pete Rose (the manager) placed his personal interests above those of his team. We begin Hall of Fame week with a close look at the most prominent player barred from entry.

Since this is the first installment of our “Overrated” segment, it’s best to begin by being very clear that, at least as we’re using the term, “Overrated” is absolutely not the same as “Not Great.” In fact, in most cases, for a player to be well regarded enough to become overrated it requires that they’re great to begin with. So no, we’re not saying that Pete Rose wasn’t great.

What we’ll be dealing with in this (likely pretty rare) series of articles are players who are seen as significantly better than they were, and we’re going to examine the reasons for that misperception.

In the case of Rose, the primary reason is pretty obvious: he’s “The Hit King”, with more hits than any other player in MLB history. Because of that career mark, there are some who say he’s the best hitter of all time, and there are some who’d place him as a “pantheon player” – one of the all-time greats.

We’re not the first to argue along these lines, for instance, Dayn Perry at CBS sports said something very similar. However, since Rose has discounted Ichiro’s NPB hits by saying “the next thing you know, they’ll be counting his high-school hits” and said that the reason David Ortiz isn’t a Hall of Famer is “because of how many hits he has”, we’re going to take a close look at just how legitimate Rose’s chase of the hit record was (hint: it was dodgy, at best).

We usually try to frame our statements with an appropriate level of “as far as the evidence shows,” so when we say “Rose had no business being on the field during the season he broke the record,” hopefully that won’t seem like hyperbole.

In 1985 the Cincinnati Reds gave Pete Rose 500 plate appearances at first base, and the only reason they did is because in 1985 (and 1986) Rose was also the manager – it’s quite reasonable to say that no other manager in MLB would have given Rose that amount of playing time.

In 1985, here’s how Rose compared to the National League average performance for all first basemen:

Rose was below league average at the position, particularly relative to the average power numbers for the position. First base (if you’ve never noticed) tends to be the domain of hulking power hitters who send moonshots into the bleachers. It’s the lineup position that produces more offense than any other in baseball.

Therefore it’s problematic that in 1985, the year he broke the hit record, Rose hit two home runs and slugged over 100 points below league average for his position.

The only things he did well were walk and avoid strikeouts, both of which have value (especially the walks), but those are not nearly as valuable when coming from a lineup spot that is expected to produce much bigger power numbers. He was even worse in the second half of the season, when he actually broke the record:

Rose was downright feeble in the final three months of the season, slugging .287 and producing league average wRC+Weighted Runs Created Plus: A comprehensive measure of offensive production relative to the league. 100 is average and each point above or below is a percentage better or worse than the average player.. That’s league average for all positions – when Rose was chasing the hit record, he was filling the (normally) most productive spot in the lineup with a hitter than would be seen as middling even if he were a slick fielding shortstop.

And these comparisons have been with all first basemen and all hitters – if we only look at starters, then Rose suffers even more. In 1985, 25 MLB first basemen received 400+ plate appearances (Rose had 500 PA), of those 25, Rose ranks 22nd in fWARWins Above Replacement as calculated by FanGraphs. A stat that attempts to measure a player’s contributions in all facets of the game and quantify how many more wins that player contributed than a “replacement level” player would have (a replacement level player being a hypothetical “AAAA player” every team has in its farm system., 20th in wRC+, and dead last in slugging, home runs, and ISOIsolated Power. A stat that represents how many extra bases a hitter gains per at bat. A measure of the “power” a hitter produces rather than a measure of overall offensive ability. ISO is the difference between Slugging and Average (i.e., a hitter that hits nothing but singles will have an ISO of zero because his slugging and average will be identical). A hitter with an ISO of .140 is average, .200 great, .250 a premier power hitter..

Of the three first basemen who produced fewer fWAR than Rose, two played for last place teams while Rose’s Reds finished 2nd in the NL West, so Rose was trotting a singles hitter out to first base (to hit 2nd or 3rd in the lineup, no less) while his team contended for a pennant (Carew’s Angels also finished 2nd, one game behind eventual World Series champion Kansas City – imagine if they’d started a first baseman who’d produced more than 0.1 fWAR on the season). 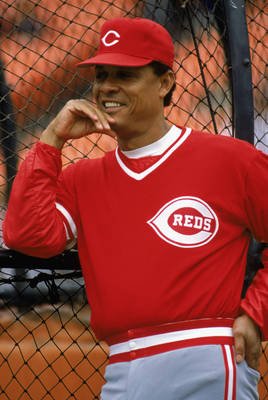 All of this is damning, but it’s made truly inexcusible by the fact that there was a much more productive first baseman on the Reds roster who was sitting so that Rose could chase Cobb’s mark: Tony Perez.

Rose’s longtime Reds teammate, Perez had a nice, late career “renaissance” season in 1985, putting up a 142 wRC+ in only 207 plate appearances. Would Perez have produced at that rate for the whole season? Probably not, but there isn’t a question that he was a better hitter than Rose by pretty much any measure.

On top of that, the Reds also had Nick Esasky on the roster, mostly playing in the outfield, but capable of playing 1B (he received the most 1B starts the next year). Here are all three in 1985:

Is there any real question that someone other than Rose should have been receiving those starts at first during that 1985 season? Perez produced twice as much fWAR in 40% of the playing time. Rose was putting the worst player on the field, hands down.

Wasn’t it inevitable though?

One might ask, even with reduced playing time, wouldn’t Rose have eventually gotten the record the next season or the one after that? Probably not. The bottom finally fell out for Rose in 1986 and he went from “below average for the position” to “one of the worst players in MLB”.

Here’s Rose compared to his Reds teammates in 1986:

And compared to league average for the Position:

That Rose even received 272 plate appearances is only because he was still the one filling out the lineup card. For all of MLB, 36 First basemen received 250+ plate appearances in 1986, of them Rose was 34th in fWAR and dead last in wRC+, slugging, home runs, and ISO (and most other offensive categories, for that matter).

Without Pete Rose the manager, Peter Rose the player almost certainly doesn’t pass Cobb on the all-time hits list. And all of that is to say nothing of the fact that Rose may have been cheating with a corked bat during that 1985 season.

So Where do We Rank Pete Rose?

Even without the hit record, Rose clearly was a great player with a great career – but is he one of the all-time greats? Not in our evaluation.

One of the clear strikes against him is that at only one point in his career can we even say he was the best player on his own team, and it’s damned hard to put someone in the all-time pantheon when you can’t even say that.

Rose played on some great Reds teams, but great teams are made of many players and Rose played with some of the best. When he arrived at the Reds, Frank Robinson was clearly the stud on that team and Vada Pinson was also measurably better than the young Rose.

After Robinson was (foolishly) traded, Rose saw a small window of a few years where he was the best player the Reds had before the arrival of Tony Perez, Johnny Bench, and later, Joe Morgan. Once he left the Reds to join the Phillies, the declining Rose clearly paled in comparison to teammate (and Pantheon Player) Mike Schmidt.

From 1965 to 1969 though, one can take a stretch of any three years and Rose produced the most fWAR on the Reds, with 66-68 his clearest period above his teammates (not surprisingly, those were some of the Reds least successful years as a team – a great player without teammates is still just a great player).

During Rose’s most productive years from 1972-1976 though, he was – at best – the second-best player on his own team (and maybe the third-best). During the peak years of the Big Red Machine, Rose was incredible but his teammate Joe Morgan was even better (Morgan was probably the best position player of the 1970s).

Hard decision? Player A is hitting for much more power, is a superior baserunner, and is better offensively in every category except raw average, where he’s only 11 points behind and is still hitting over .300. Player B is still a guy you’d take in your lineup in an instant, he’s just clearly behind player A.

Player A is, as expected, Joe Morgan and player B is Rose. Here’s another, closer comparison:

This one is more interesting. Offensively, they’re very close, with Rose clearly hitting for more average and Player A for much more power. They’re probably a tossup based on offense alone. If I tell you that Player A is a top defensive catcher as well though, that makes the decision much easier, right? 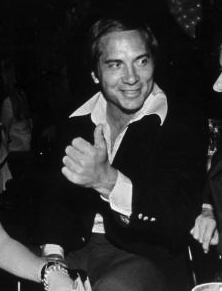 Look at those lapels

Of course, that’s Johnny Bench’s stat line for those years. Again, Rose is a guy you’d want 100% on your team, but if you can only choose one, you’re probably taking the catcher, since that kind of production is harder to find at that position than it is at a corner infield or outfield spot.

One odd little thing to notice: Bench was a better baserunner than Rose during those seasons – that’s typical of Rose’s career. For as indelible an image Rose sliding head first is, he was a career 57% base stealer – at that rate, he should have almost never made an attempt.

So Where Should Pete Rose Rank?

When all is said and done, Rose certainly was one of the the greats of his generation, though he really does fall short of the all-time pantheon. We’d say he “feels” like a Top-50 position player (and thus a Top-100 of all-time) and his career stats seem to bear that out.

As Perry pointed out in the above mentioned article, Rose hurt his career rate stats by chasing Cobb’s record during his waning years, so those ranks would look better if Rose had retired when he “should” have, but even if we bump him up a bit (Perry notes that decline was a long one), he’s still looks like one of the greats for his time, but not one of the all-time greats, and without the hit record, that’s likely where the vast majority of people would put him.