Hall of Fame week continues with a look at first-ballot Hall-of-Famer, Ivan Rodriguez. Rodriguez is often considered the greatest defensive catcher in the history of baseball, and he’s in the conversation for greatest catcher of all time. He definitely has a significant lead in the various ‘defensive runs’ metrics, but he also caught more games and more innings than any other catcher. We dug deeper and as the title suggests, it wasn’t just perception or longevity – he was truly great. There are a few other catchers for whom you can make the argument they were the greatest defensively, but it’s much harder to argue Ivan Rodriguez wasn’t.

It’s often difficult to evaluate defense prior to the past few years. While we’re entering a golden age for defensive metrics with things like PITCHf/x and now FIELDf/x, beyond the last decade or so the stats get a bit shaky. Get beyond that and much of the data we’d want to see just wasn’t recorded anywhere. 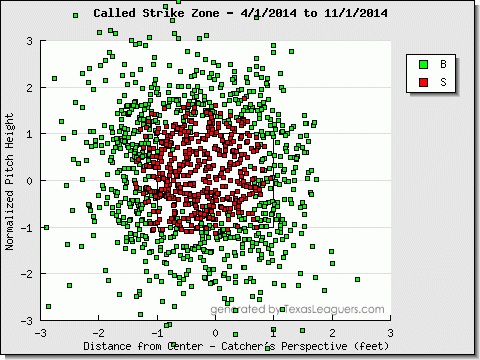 For catchers, it gets even more difficult. Many of the super important things that catchers do (e.g., pitch framing) were utterly untrackable. As a side note, as an “Old School” baseball guy in many ways, the new stats showing the importance of pitch framing is a prime example of why I love Sabermetrics and analytics. Playing the game, I knew it was important when my teams had (or didn’t have) a catcher who could ‘steal’ strikes. Having the data now just makes me smile.

Palmer’s metric does a great job examining the caught stealing rate and accounting for changes in the run game between eras. However, it doesn’t measure how often opponents tried to run – or didn’t – on a given catcher. Much of the regard for top defensive catchers isn’t just that they throw out runners, but that they affect the game by preventing them from stealing in the first place.

Attempts against per nine innings, relative to league average

Look at that heading – pure poetry there (eat your heart out, Langston Hughes). To try and measure how a catcher affected the running game by “preventing” steal attempts, we invented a new stat (we think – we couldn’t find it anywhere, so if you came up with it first, let us know). This is something that DRS addresses, but that stat only goes back to 2002.

First, we figured out each catcher’s steal attempts per nine innings. We then indexed it relative to league average to account for differences in era. For instance, in 1987 there were 1.2 steal attempts per team per game, last season there were 0.728, so a catcher who faced .8 attempts would have been a stud in 1987, but below average last season. We divided the players attempts against by the league average and then multiplied it by 100 to give us what we’re dubbing “Att-”

Where does Ivan Rodriguez rank in Att-?

Using our new metric we looked at all the catchers with at least 125 career DEF. Rodriguez tallied 317.1 in his career, so we figured dropping down to 125 was already very generous. We also included any catcher with at least 100 DEF and a CS% of 40% or higher. That gave us a list of 20 players.

One drawback of this stat is that caught stealing wasn’t always fully tracked, so for any player that played prior to the 1950s, the stat can’t be reliably calculated. Luckily for us, that really only affects Del Crandall who, at 154.1 DEF is well down our list (we’ll still deal with him and a few other special cases later). 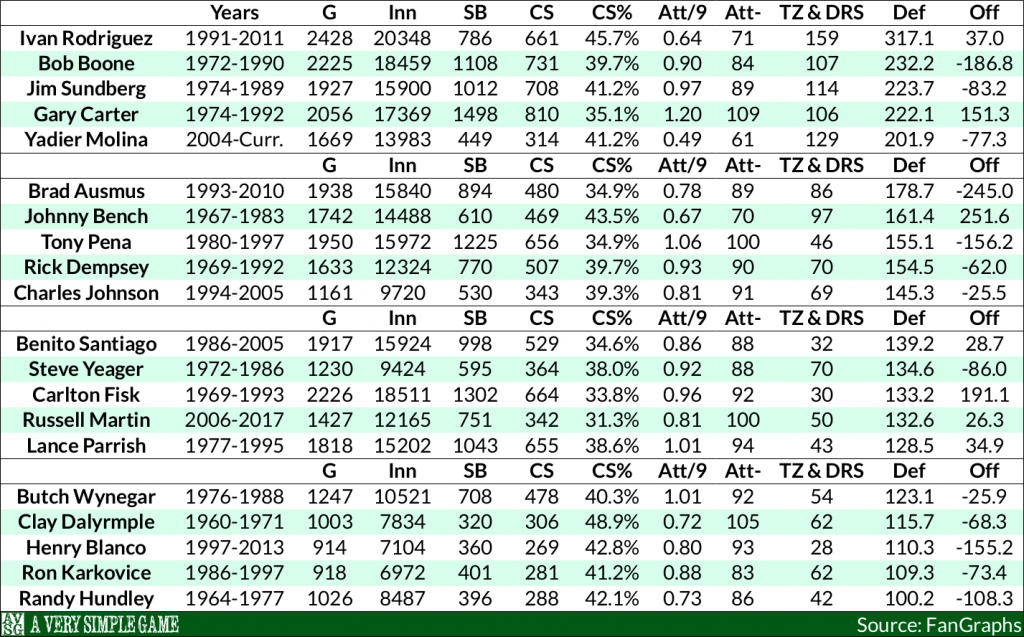 There’s a lot going on there, but a few things should jump off the page. First, the gap in DEF between Ivan Rodriguez and Bob Boone at #2 is huge. Rodriguez is 85 runs ahead of him – roughly the gap between Boone at #2 and Charles Johnson at #10. Second, there are some pretty clear tiers that form behind Rodriguez.

True to his reputation, Rodriguez excels in the running game stats. He’s #2 on our list in caught stealing percentage, throwing out 45.7% of runners. That’s not adjusted for era, however, and as Palmer notes in his article, as attempts dropped, success rate climbed (so his 45.7% was a larger amount above league average than Dalyrmple’s 48.9%).

Rodriguez is also #3 in Att-, behind Yadier Molina and just behind Johnny Bench. The reality matches the perception: runners absolutely did not want to test Rodriguez. Bench and Molina also threw out more than 40% of attempted steals, and are probably the best comparisons to Rodriguez in terms of running-game-dominating catchers.

Before we look at that trio, there were a few “special cases” to consider as well. Dell Crandall (mentioned above), Yogi Berra, and Ray Schalk all played during years where we couldn’t reliably establish a league rate. That’s true for Roy Campanella as well, and both his and Thurmon Munson’s careers were cut short by tragedy. We can say that the 1940s and 50s (when Crandall, Berra, and Campy played) were a low point for steals, and we don’t see an attempts per game above .6 until the 1960s.

All five were exceptional defensively. Notably, Schalk is mentioned in Palmer’s article, and Campanella holds the record for throwing out 57.4% of all baserunners. It’s hard to place any of them ahead of Rodriguez, but they deserve some mention in our conversation. To return to our top trio, however:

All three greats are very close, though Rodriguez’s overall game and longevity likely put him ahead of Molina and Bench in terms overall defensive value. Molina still has some years to play though, so who knows what his final stats will look like. And we’d be remiss not note just how much better Bench was offensively (we didn’t include OFFOffensive Runs Above Average. A stat that attempts to measure a player’s offensive contributions, combining both hitting and base running. Roughly 9-10 OFF is equal to one Win Above Replacement. by accident) – it’s that all-around game that makes him the greatest ever in our book.

Rodriguez is still tops defensively though. It’s always nice when the reality matches up with our memories, isn’t it?