The 2016 National League Cy Young Award race poses several interesting questions this year. What is of more value: a great pitcher pitching fewer innings or a very good pitcher pitching more? What tools are best to measure run-prevention? What part will emotion and sentiment play in the minds of the voters? While the field worth considering in the National League is roughly as large as in the American League, unlike the AL there are three clear frontrunners in the National League – each with a compelling argument. 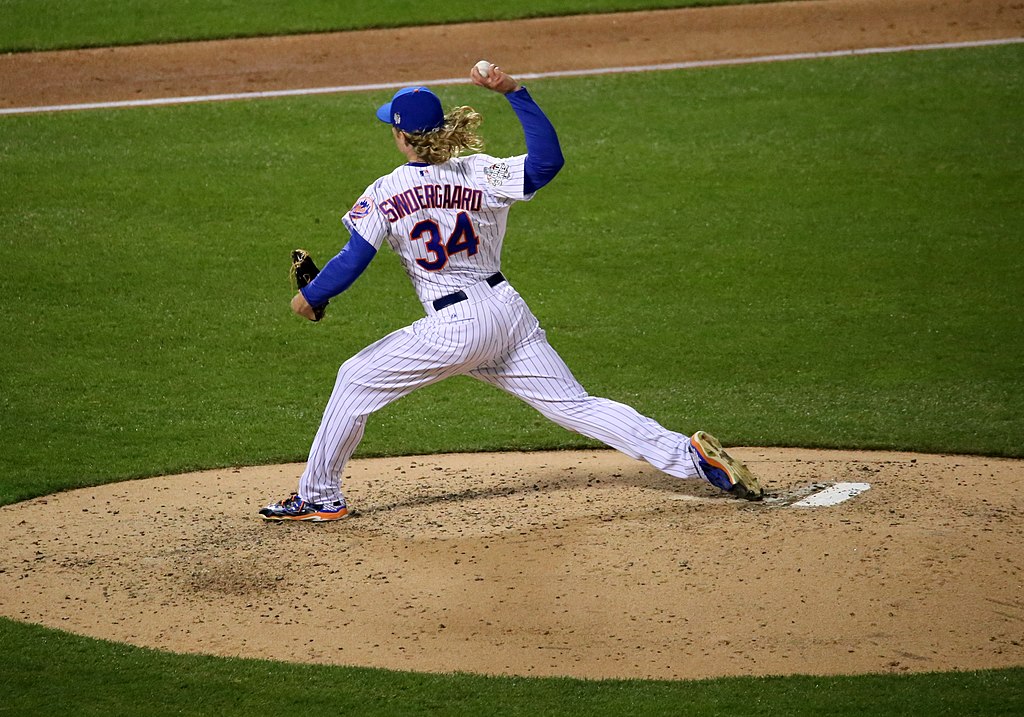 We’ve identified nine pitchers who have a legitimate place within the conversation for the National League Cy Young Award. Here are the nine ranked by fWAR with their counting stats: 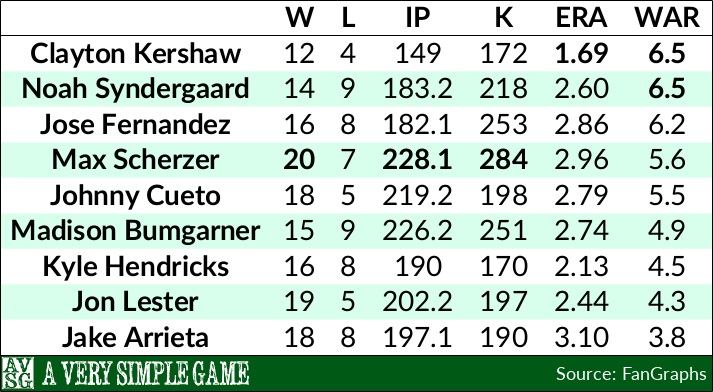 The same players with their various ERA and ERA estimator stats:

And the players with their rate statistics:

Those nine pitchers break down into a three, relatively neat categories. First up are the dominant young guns: Jose Fernandez and Noah ‘Thor’ Syndergaard.

Both of these pitchers hit around 180 innings – below most of the other pitchers on the list (except for Clayton Kershaw, and we’ll get to him). They were however more dominant pitchers in terms of ERA and their rate stats than everyone on the list (again, we’ll get to Kershaw). Because of this, the argument for either is one of quality over quantity.

If we’re predicting one of the two to get more votes, it’d also be Fernandez due to his higher strikeout total (253 to 218) and due to the emotional impact of his tragic passing (it seems somewhat crass to discuss his death in this context, but it’s obviously something that will be on the minds of the voters – and there are worse things than seeking to honor a young man who died too soon).

The next grouping are what we’ll call the Stud Workhorses – pitchers who were very good and put in a lot of innings. In fact, they finished 1-2-3 in innings for the National League.

Of this trio, Max Scherzer, owner of the coolest looking eyes in professional sports, seems clearly better than the other two. He’s best in most stats, has way more strikeouts than Cueto, and 25% more wins than Bumgarner – there’s something there for every voter, no matter how they view the game. 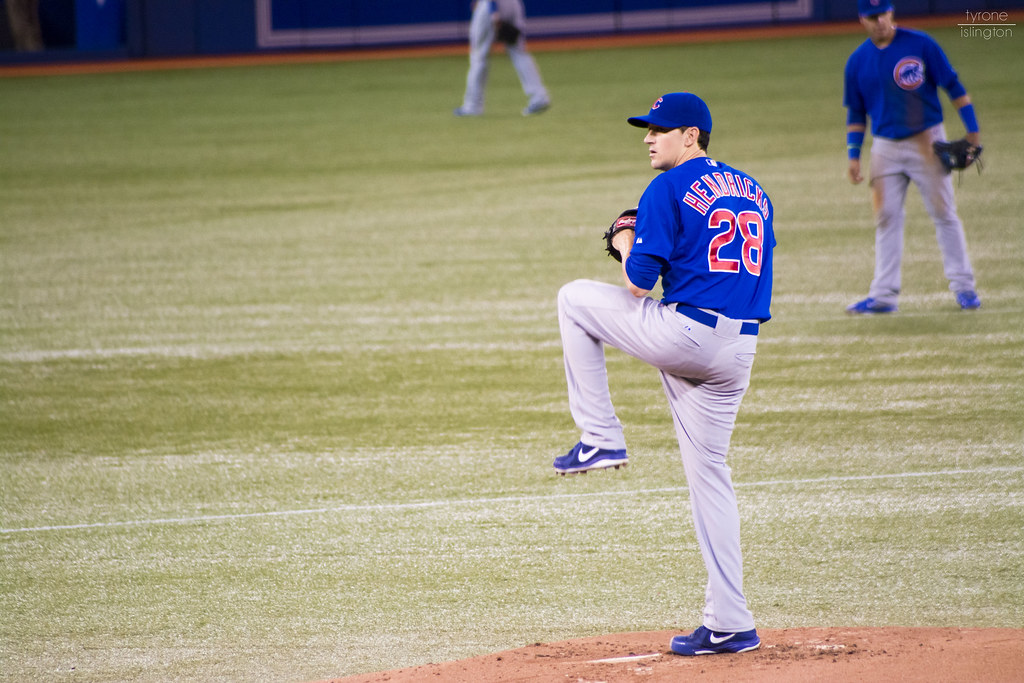 All three of these pitchers were incredibly good, and all were similar to boot. However, none of them were really the best at anything. Take a look at the comparisons at the very top of the article – the only one of these three pitchers to lead in any stat was Arrieta in ground ball % – if you’re not best at anything, can you really be the best overall? Their similarity also means that there’s no clear ace of the squad – great for Joe Maddon as he looks at his playoff rotation, not so great when it splits the award vote.

Of the three, Kyle Hendricks has the best claim on the award since he led the league in ERA (he’s not tops on our list above because it includes Kershaw, who came up a bit under two starts short of qualifying). Hendricks logged 190 innings this season, about one start more than our ‘young guns’, Syndergaard and Fernandez.

However, when we stack them together, Hendricks definitely comes up short in the comparison. He took the ERA title, but did so with a very low BABIPBatting Average on Balls In Play. As the name suggests, this is the percentage of balls put into play (either by a hitter or by a pitcher’s opponents) that turn into hits. League average BABIP is about .300 and when a player is deviating from their career average by a significant amount, that’s often a red flag they’re getting either lucky or unlucky over the course of a single season. – when we adjust for team defense, his FIP, xFIP, and SIERA are all well behind both Syndergaard and Fernandez. He also wasn’t nearly as dominant as either of them, with a K-BB% 6.5 points behind Syndergaard and a full 10 points behind Fernandez.

Absent from our conversation so far has been the (largely) undisputed most dominant pitcher in MLB: Clayton Kershaw. Kershaw presents a very interesting case this year. The argument against Kershaw is a simple one: he only pitched 149 innings, coming up 13 innings short of qualifying for the ERA title.

The argument for Kershaw is also relatively simple as well: though he pitched fewer innings, when he did pitch he was not only better than any other pitcher in baseball, he was better than most pitchers in history. If Kershaw had logged those 13 innings, here’s where his season would rank all-time in the modern era (since 1901:

It’s actually fitting that Eckersley comes up, since Eck not only won the Cy Young but the MVP in 1992, while logging only 80 innings total. Nine relievers have won the Cy Young, and though voters have definitely moved away from that pattern as advanced analytics have become mainstream, it’s enough to note that the Cy Young award doesn’t have a minimum innings requirement.

Q: If Kershaw delivered 18% fewer innings, was he at least 18% better in the innings he pitched to “make up” the difference?

Obviously it isn’t quite that simple – for instance, if Fernandez pitched well enough to deliver a win in a given situation, then Kershaw’s additional value would be a “surplus” (i.e., 20% more strikeouts might not mean 20% more wins, etc.) On the other hand, simply missing innings isn’t the same as missing value – getting 150 innings of Kershaw and 30 innings of an average pitcher adds up to a Cy Young candidate, and if you asked every MLB team whether they’d take that situation, we’re sure you’d get 30 instant ‘Hell yes!’s in reply.

Those are both somewhat peripheral to the question of “who was the best pitcher?” but they’re not irrelevant either – at the end of the day, isn’t the best pitcher the one most increases his team’s chance to win? In any case, we’re going to go right ahead and try to quantify the marginal values in quantity and quality.

Was Kershaw 18% better than Fernandez? That’s actually hard to answer. His ERA and WHIP say yes (40% and 35% better, respectively), but we’re not huge fans of either since team defense and luck enter into the equation too much. Looking at fielding-independent measures, FIP says yes (21-22%) and xFIP says no (9-10%). SIERA puts him just below, and our favorite stat for pitching dominance, K-BB%, says no as well.

In this comparison, it’s super close. In a Sandlot Test we’d take Kershaw, but over the actual season played we’d give a very slight edge to Fernandez.

The comparison between Scherzer and Kershaw is surprisingly easier despite the greater disparity of innings. Kershaw pitched 35% fewer innings than Scherzer and was 30-40% better across most stats, including the fielding-independent measures. Scherzer makes a contest of it with SIERA and K-BB%, but here we’d take the 150 innings of historically great pitching vs. the stud workhorse season.

To complete the comparison, Fernandez pitched about 20% fewer innings than Scherzer and was roughly 25% better by the fielding-independent metrics. His margin was less on SIERA & K-BB%, but he was still ahead.

Our final prediction is that Jose Fernandez will win the National League Cy Young. Both Kershaw and Scherzer have won the award previously, and Fernandez has a very solid argument for being the best pitcher outright. Those factors plus the opportunity to memorialize his life and tragic death will likely push him solidly ahead of Kershaw and Scherzer.

Even more so than Scherzer, Fernandez has something to appeal to every type of voter – most of his rate stats and advanced metrics are second only to Kershaw (and he led the majors in K%), his strikeout total was second only to Scherzer, and there’s a clearly appealing ‘narrative’ in awarding him posthumously. He deserves the award and will likely receive it.