Hall of Fame Week continues with part two of our look at the careers of six Hall of Famers who lost playing time to service in WWII. Continuing on from Part One, we look at our final three Hall of Famers and what their careers might have looked like were it not for their wartime service.

One of the most interesting names on our list (at least to my mind), Johnny Mize is a player who often falls into the group of “great but not pantheon” guys. He’s a name that comes up in trivia questions; the player everyone’s heard of but who doesn’t immediately come to mind when asked something like “Who was the first player to hit 50 home runs while striking out less than 50 times?” His career numbers, impressive on a per season basis, were kept well short the big milestones. Unlike Hammering Hank, Mize’s reputation definitely suffered for the loss. 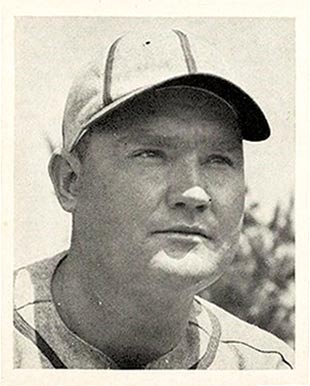 Mize lost three seasons to WWII, his age 30-32 seasons. Like many ballplayers he did not serve in combat, instead playing service ball against other pros. While these seasons were in the middle of his career, and his best home run season came after the war, the years surrounding his service were not his best (and were oddly variable for a player of his caliber). Because of this, his projections are more modest than one might expect – though certainly still quite impressive.

The most compelling – and debatable – projection is his home run totals for those years. Three years before his service, Mize hit 44 home runs and two years after the war he hit 51, so there is no question he exhibited significant power surrounding his missed years.

However, in the two years prior to his service he hit only 42 home runs total (in 268 games), an average of only 21 per season – and this in his age 28 & 29 years, usually a player’s statistical peak. Because of this, Mize projects out to only 30 home runs per year in his missed seasons. These low projections keep him well away from the 500 HR Club, though certainly reflect his abilities more than his actual numbers do at first blush.

If Mize had played those years would he have been the player he was in 41 and 42, or would he have bounced back to put up the prime numbers he was clearly capable of producing? It’s impossible to say and his unique situation makes his projections the most uncertain.

What does seem certain is that his “prettier” career counting totals would likely keep him from being as forgotten as he is. Mize currently ranks 12th all time in wRC+ tied with Mark McGwire and Tris Speaker. His projected wRC+Weighted Runs Created Plus: A comprehensive measure of offensive production relative to the league. 100 is average and each point above or below is a percentage better or worse than the average player. would have improved this number (Mize’s OBP was always very strong) which likely would have moved him into the top ten all time, ahead of Jimmy Foxx and Stan Musial and behind Ty Cobb and Joe Jackson.

Speaker, Musial, Foxx, Cobb, and Jackson – those are the names that should surround Mize. Were it not for his missed seasons, they probably would keep him company far more often than they do now.

Of the players we’re examining here, Stan Musial lost the least time to the war, missing only the 1945 season. Musial served that year in the Navy, stationed at Pearl Harbor, playing service ball and ferrying crews from damaged ships into port. 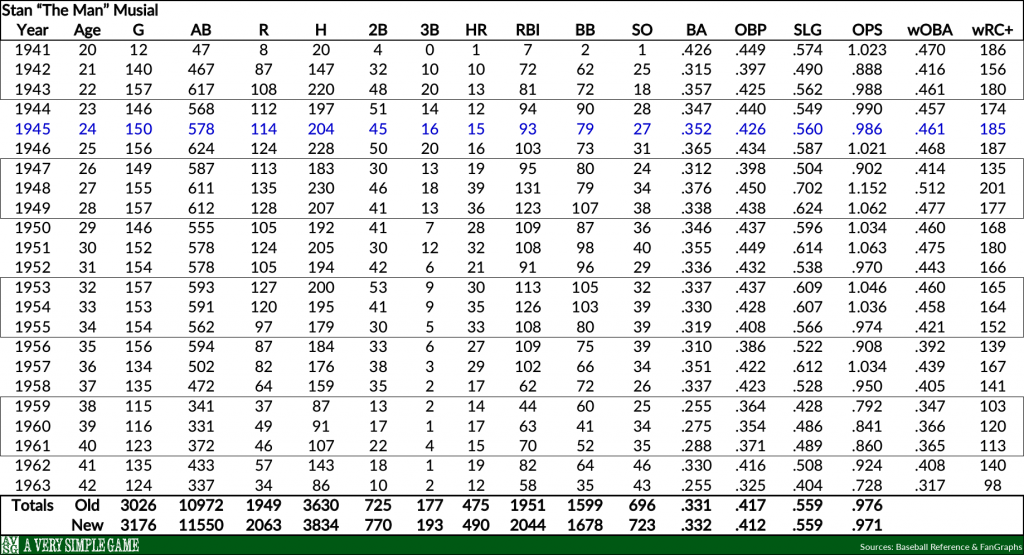 Despite his impressive career totals, Musial just wasn’t a power guy during his early career. He was already an offensive monster, slashing .341/.423/.538 in the three seasons prior to his service and .339/.416/.547 in the two following, but he only hit 70 home runs over those five seasons combined (average of 14 per season).

Because of this, Musial projects to only 15 or so home runs in his missed season. Even if one wishes to be generous, it definitely seems unlikely he’d have exploded for 25 when his previous career high was 13 and his best mark in the five surrounding seasons was 19, the year before he found his power stroke in 1948.

Now, like the question of whether Williams would have played another season or two to chase Ruth had he been much closer, it’s possible that Musial would have hung on for one more season were his needed mark only 10 instead of the 25 it was (if Musial had played in 1964, it would have been seven seasons since he last topped 25, it wasn’t very likely – 10 would have been a much more realistic target).

The only pitcher on our list, and one of the few major league players to see combat during the war, Bob Feller missed three full seasons and the better part of a fourth due to his WWII service. He enlisted immediately after the bombing of Pearl Harbor, the first MLB player (and US professional athlete) to do so.

Feller wanted a combat post and tried to become a fighter pilot, but he failed the required hearing tests. He was eventually assigned to the USS Alabama and saw combat in the Pacific Theater in late 1943 and 1944, including the Battle of the Philippine Sea (aka, the Marianas Turkey Shoot). 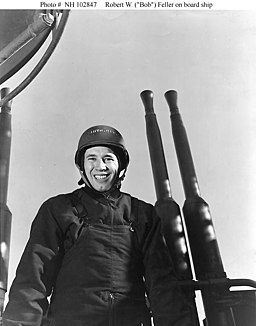 Feller is an interesting case for a couple of reasons. One, he missed more time than most players, enlisting immediately after Pearl Harbor and returning for only nine games in 1945. Two, his missed seasons came during his statistical prime (though it was younger than the prime years for many players).

Three, the fact that Feller was a pitcher raises the question of whether age or innings pitched has more of an impact on a pitcher’s decline. With some (many?) pitchers it can be a “it’s not the years, it’s the mileage” situation. 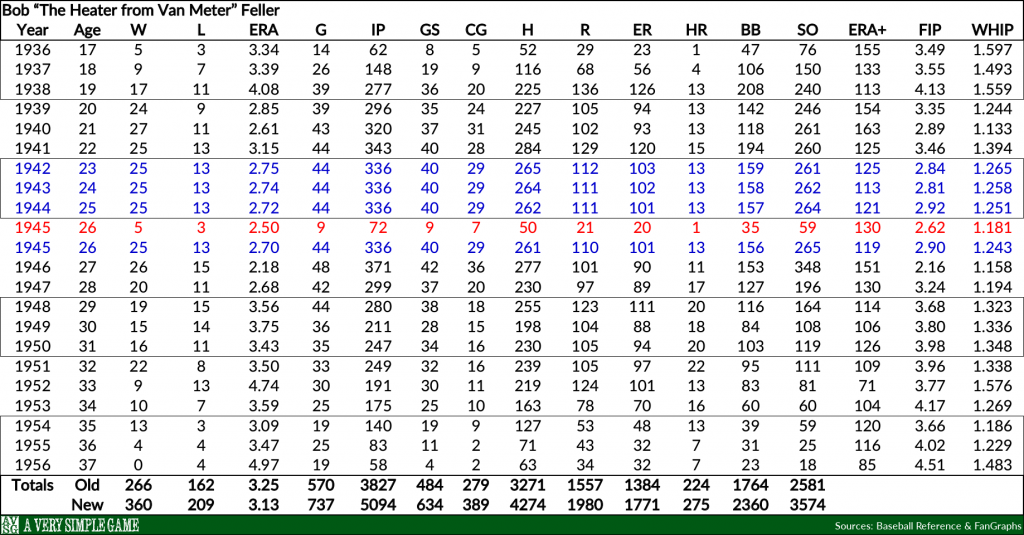 Feller has always been considered an all time great. He was a first ballot Hall of Famer and received 93.8% of the vote. He was a dominant strikeout pitcher in an age when basically nobody was. However, with his career stats adjusted for his missed seasons, Feller absolutely looks like a player out of time.

The number that jumps off the page is his adjusted strikeout total of 3574. When Feller retired in 1956, his career total of 2581 was 3rd all time, behind Walter Johnson (3509) and Cy Young (2803). At the time, Feller was one of only three players with 2000+ innings pitched who averaged more than six strikeouts per nine innings (Rube Waddell and Dazzy Vance are the other two, Johnson averaged 5.34).

Feller’s projected total actually moves him into first place, passing Johnson by 65 strikeouts. This is where the “years v. innings” conversation is most relevant: even a slight dip in the projections and he wouldn’t have passed Johnson. As it happened, Johnson was the career strikeout king until Steve Carlton passed him in 1983.

Even if Feller hadn’t passed Johnson, it seems extremely likely he would have entered the 3000 strikeout club as only its second member (Johnson was the lone pitcher with 3000 Ks until Bob Gibson reached the mark in 1974).

In addition, his win total jumps from 266 to 360, which would have put him 7th all-time and 5th in the modern era at his retirement. Only one player has topped 360 since Feller’s retirement (Warren Spahn with 363) and only two have topped 330 (Maddux with 355 and Clemens with 354).

As mentioned, Feller is already considered one of the greats, but his adjusted stats put him in even rarer air. Arguably, for the first 60 years of the modern era, the only player who was Feller’s equal in all facets was Walter Johnson – quite the elite company (here we discuss just how dominant Johnson was).

And there we have it – hope you all enjoyed our inaugural “What If” installment and the 2015 Hall of Fame Week.