Last night Los Angeles Dodgers rookie Ross Stripling was five outs away from throwing a no-hitter in his very first MLB game. To protect Stripling’s arm (and his team’s lead), manager Dave Roberts pulled Stripling from the game. The Dodger bullpen then proceeded to lose the no-hitter, the lead, and then the game. Roberts had several reasons to make the move, but it does raise the question: Has anyone ever thrown a no-hitter in their MLB debut? Yes. Once. 124 years ago.

We’re not here to debate whether Roberts was correct in pulling Stripling. As many have noted, Stripling has already had Tommy John surgery and despite the no hitter, he definitely wasn’t dominantly marching through the (potent) Giants lineup. As a player, you’d like to see a guy get to finish his no-hitter, but as a player, you’d also like to see your team win, and Roberts made the decision he thought was best. 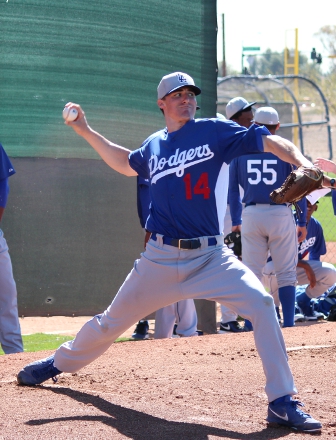 At the rate he was going, Stripling probably would have needed 20-30 more pitches to finish out the game (even assuming he had the stuff to do so). That would have meant 130 pitches on a rookie’s arm, the first game of the season, only 71 innings post-Tommy John surgery; think Roberts might have gotten criticism on that decision instead? Especially if he pushed through and still lost the no-hitter?

Mr. Charles Leander “Bumpus” Jones pitched a no-hitter in his Major League debut on October 15, 1892. For the record, that’s almost a decade before the American League was even founded to create Major League Baseball as we know it. Mr. Bumpus Jones pitched the only debut no-hitter in history, pitched seven more games the next season (six starts), and then didn’t pitch another inning in the major leagues. That means Jones pitched no-hitters in 14% of his starts – quite the rate.

Two other players pitched no-hitters in their first MLB starts, Bobo Holloman (we are so lame with our modern nicknames) in 1953 and Ted Breitenstein in 1891. Both pitchers had previously appeared in relief though, so it was neither’s MLB debut.

Holloman only made 10 starts in the majors (and 22 appearances overall), all in 1953. His ratio of 1:10 no-hitters:starts has got to be one of the few that comes closest to Bumpus Jones. He’s also the only one of the three to pitch his no-hitter in the modern era. Breitenstein actually had a legitimate career, pitching 301 complete games over 11 seasons and pitching a second no-hitter in 1898.

So yes, Stripling missed out on the opportunity to do something that had been done only once in Major League baseball (and not done since a month before Grover Cleveland was elected president for his second term). He also missed out on having his surgically repaired arm over-taxed during his MLB debut. We’ll leave it to him whether in 20 years’ time he’d rather have protected his arm or taken the chance to join Bumpus and Bobo as a trivia answer for the ages.