Jordan Zimmermann becomes the first big free agent contract of the offseason, signing with the Detroit Tigers for $110 million over five years – will he be worth it? 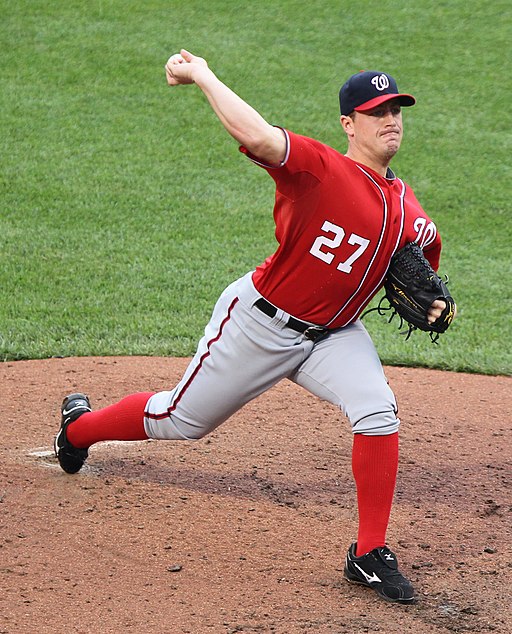 According to CBSSports Jon Heyman, the Detroit Tigers have bolstered their starting rotation by signing free agent Jordan Zimmermann to a 5-year, $110m deal (pending a physical).

As we noted in our AL Central offseason preview, the Tigers needed to upgrade their rotation (28th in the league in Starter FIP-Adjusted Fielding Independent Pitching. A measure of the events “under the pitcher’s control” (HR, BB, Ks, HBP) that attempts to remove the influence of team defense – whether good or bad – on the pitcher’s stats. It is then adjusted for park effects and related to league average FIP. 100 is league average and every 1 point deviation from 100 is a percentage point better or worse than league average. E.g., an FIP- of 90 means the pitcher’s FIP was 10% better than league average, and an FIP- of 110 means it was 10% worse.) while also getting younger, all the while staying in the win-now mode dictated by owner Michael Ilitch.

As far as free agent signings go, Zimmermann fulfills those needs as well as any pitcher on the market.

Of the starters on the market, only Zimmermann and Johnny Cueto are under 30 (both are 29) and produced at least 3+ fWARWins Above Replacement as calculated by FanGraphs. A stat that attempts to measure a player’s contributions in all facets of the game and quantify how many more wins that player contributed than a “replacement level” player would have (a replacement level player being a hypothetical “AAAA player” every team has in its farm system.. While Cueto is likely the better of the two by a little bit, he’s also been less durable (losing most of the 2013 season to a variety of injuries). On the other hand, Zimmermann did have Tommy John surgery back in 2009 – he’s actually the first pitcher to sign a $100+ million contract after Tommy John surgery – but he’s been incredibly durable since then, pitching in at least 32 games each of the past four seasons.

Will Zimmermann live up to his contract though? Well, there’s actually a good shot he will.

No Crystal Ball on Jordan Zimmermann’s Next Five Seasons

One of the truths about free agent contracts is that teams are almost always overpaying, in large part because players are almost always signing a contract that covers their decline years. If a player produces even to the “break even” level of the contract, we rate it a good one for the team, if they exceed that production, it’s a great signing.

Because Zimmermann doesn’t turn 30 until two months into next season, and because this contract is a 5-year deal, the Tigers are likely buying mostly peak and post-peak years. Using Lewie Pollis’ calculations that 1 WAR cost about $7m on the free agent market, Zimmermann’s $22m/year contract means he needs to produce roughly 3 WAR per year in order to make it money well spent for the Tigers, and that production seems quite reasonable.

Using a slightly modified version of Tom Tango’s Marcel projection system (we’re adding his 2012 season with appropriate weight), this is how Zimmermann projects for his average season and his final season under the contract.

Even including his more “mundane” 2012 season (to “balance out” his excellent 2014 in the projections), Zimmermann looks to be a 3 WAR pitcher over the next five seasons when adjusting just for the aging process. If he hits these projections, the Tigers will have gotten a great price on a rotation workhorse, and if he undershoots his projections by 10-15%, it’s still probably a solid deal.

That’s not surprising since he’s been a consistent 3.5 WAR pitcher over the past five seasons. He rarely walks batters: he was 5th in MLB among starters this year with a 4.7% walk rate and his highest walk rate over the past five seasons was 5.3% (which still would have been top-20 in MLB this season). And while he’s not a power pitcher or big strikeout guy, he fans enough hitters (19.7% K% in 2015, lowest K% over past five seasons was 18.6%) that his K-BB%Strikeout Percentage – Walk Percentage. Probably the best measure of both a pitcher’s strikeout skill and their control (and ability to prevent walks). When comparing pitchers with significantly different walk rates, it better reveals a pitchers power/control combination than K:BB ratio does (since that can be skewed by particularly good control, even with middling strikeout numbers). remains solid when combined with those few walks (30th in MLB this year).

This all assumes Zimmermann doesn’t fall off a cliff due to injury or “mileage”, which obviously isn’t a given. He definitely declined in 2015, but not as steeply as some suggest. He posted career high FIP & xFIP and does indeed have a lot of innings piling up post-surgery (Addendum: Keith Law noted this at ESPN – Law doesn’t like the contract). However, Zimmermann’s K% was the second highest of his career for a full season as was his K-BB% rate.

He’s not an ace, but he’s not getting paid like one. He’s a good #2 or a great #3 who can flash #1 stuff on his best days (as 2014 showed). He’s lead the league in wins (not our favorite stat, but still), and he threw a no-hitter in 2014. In the current MLB market, $22m/yr. for turning-30 pitcher with Zimmermann’s profile could easily be a bargain. Even if the Tigers shift gears and begin a massive rebuild (as we mentioned, that’s likely on the horizion – they’re old), Zimmermann’s contract would leave him an attractive trade asset.

Perhaps concerns about Zimmermann’s Tommy John surgery kept his price low, but based on the pitcher he’s been for the past five seasons, he could be worth every cent of his contract and likely more.